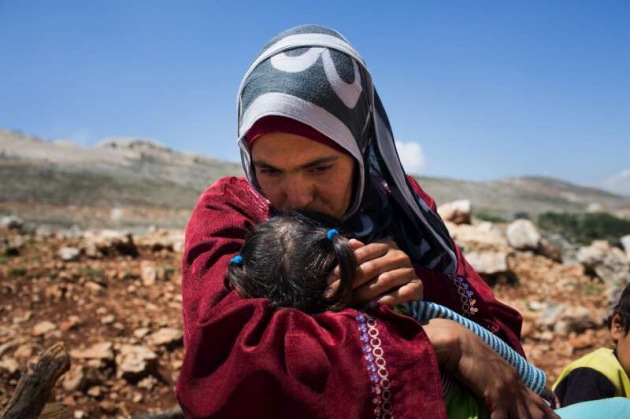 Syria has been at war with itself for years. Countless lives have been lost. Most of the country has been displaced. Many fleeing with only the clothes on their back. And our response to this disaster has largely been a shrug. This is not okay.

Those aware of the situation have turned it, like most things, into a political issue. We’ve reduced a humanitarian crisis to a partisan talking point. This is not okay.

Meanwhile, today in Syria citizens were killed through the use of chemical weapons. Weapons unleashed by their own government. Men. Women. Children. Today. Burned. Poisoned. Suffocated. Dead. The pictures on Twitter are unfiltered and haunting. If that isn’t bad enough, planes then launched rockets at the clinics where the wounded were being treated. This is not okay.

The government needs to figure out what they will do for the those remaining in the country, the refugees who’ve fled, and the evil Assad regime. Hopefully this administration will take the issue more seriously than the previous one. It is complex and I don’t have all the answers.

But you and I need to have our hearts broken by the evil in this world and let it change our attitudes, opinions, and behaviors.

You and I need to consider our response to atrocities like this. It should shake us.

You and I need to decide that this is not okay.

Don’t tell me things like, “America first.” That just does not fly for me as a Jesus follower.

Don’t tell me that Saudi Arabia and whoever should be doing more. Aren’t we supposed to be a “shining city on a hill?”

Don’t tell me “Veterans before refugees.” Certainly our vets need help and resources but the people being choked to death by Sarin gas from their government should be moved to the front of the line. (And you will see shortly we have more than enough cash to go around for refugees and veterans.)

None of that. Look at the pictures of boys and girls who lost their life today gasping for air that wouldn’t come. Read the stories of the conditions of refugee camps. Listen to the people.

Enough is enough. This is not okay.

Don’t want to bring them here? Ok, what can you do feed, clothe, and medicate them where they are at? Can you love them as people and be moved by their desperation?

This is a heart issue, not a resource issue.

The US spends around $2.5 billion on Halloween costumes every year. For one night of trick or treating and a party or two. In 2012 we spent $370 million on dressing up our pets on October 31st. None of this includes decorations or candy.

We spend nearly $14 billion on ice cream annually, and that doesn’t include restaurant sales.

The amount of federal dollars that goes to resettling refugees in the USA each year is approximately $585 million. Peanuts compared to the way we spend elsewhere.

Look, I love Halloween and I love ice cream, but I love people more. Maybe I could do without.

Without ice cream or fancy costumes or even safety.

Despite statistics showing that refugees have not been terrorists 99.99938% of the time, some will say this makes me foolish or naïve or something else, but that’s the part I am okay with. I’m not okay with people suffering like this. I’m not okay with saying no to people who are being killed just because of where they live.

Who are we as a nation if we don’t help these people?

Who are we as a Church if we don’t use our voice to bring attention to this?

Who are we as people if we can’t set aside some things in order to save the lives of people?

This is not okay.

Preemptive Love Coalition is on the ground feeding and treating people. http://www.preemptivelove.org/

My own tribe, the Church of the Nazarene, has good folks on the ground caring for refugees where they are at, donate here: https://give.nazarene.org/donate/f/125347