Note: One of my strongest convictions is that we need to hear a variety of voices. I think hearing from different perspectives will bridge unnecessary divides and cure unhealthy polarization. I think we will become more empathetic, more grounded, and have more influence in our world. I want to provide a seat at the table for those voices we may not always hear or those who can provide us with insight we would otherwise miss. I will present them unfiltered so that I can learn right along with everyone else, even if we end up disagreeing. Today I present Kristin. She leads a variety of ministries in the local church and is pursuing ordination in the Church of the Nazarene. – Chris

A number of weeks ago, I had the opportunity to attend a conference geared toward women in ministry.  The opening speaker began by stating something similar to this: “As women who are called into leadership roles, we are not here with a chip on our shoulder or an ax to grind.” I hope and pray that my message is not now nor ever steeped in bitterness toward the injustices in our world. Rather, my purpose in speaking out is that a new voice might be heard. A voice that has the potential to show the world another side of the same coin. A voice that is equally cherished by God, equally inspired by God, and equally part of God’s original plan for humanity.

As a woman called to ministry, I cannot say I’ve faced a lot of blatant sexism in my life. I honestly don’t recall anyone telling me I couldn’t do something because of my gender. In fact, my experience has mostly been the opposite. My parents have always been my biggest supporters. They modeled equality in a marriage as far as I can remember. I always thought of them as two halves to a whole, each of them holding the value of exactly half, no less, no more.  I don’t remember them ever mentioning gender equality or lack-there-of, but somehow I have always believed that men and women are equal.

When I went to college as a religion major, for the first time, I realized the unusualness of my worldview on this issue. Nobody ever told me that I couldn’t be a pastor and my professors were supportive, gracious and inclusive.  Yet even in this atmosphere I encountered countless people who assumed that my role in the church would be to support a lead pastor and minister to a small portion of the congregation – youth, children, women—rather than taking the lead position. And we need good people who will fill each of these roles, but the ability to lead is not gender-specific.

You see, sometimes prejudice doesn’t show itself through nasty words or outright hatred.  Sometimes prejudice is seen in the expectations we hold or the terminology we use. Sometimes it’s the side-long glance or the questioning eyes.  Sometimes it comes in the form of a question like “Do you need to check with your husband on that theological issue?” As if my education isn’t enough. Or a determination of my value based on how well I “pastor’s wife,” as if I am defined by my husband’s job. And sometimes it comes in the form of jokes and teasing, like calling a man “Nancy” when his physical strength is deemed lacking or blaming a woman’s passion on her hormones. It may seem harmless, and it’s probably not always intended to degrade women, but it is a contribution to gender inequality none-the-less.

So for the better part of the last ten years I have questioned what exactly I can do in leadership. What role can I possibly play in the edification of the church? Am I ‘less-than’ simply because of my gender? Am I capable of speaking in public and bringing sound doctrine to the people of God? Is God really calling ME?

Maybe these questions and fears are rooted in my own insecurities.  Or maybe these insecurities have been fed by the biases of other well-intentioned, although misguided, Christians. Either way, I do not believe that God’s intention for me is to be lost in a sea of doubt. Nor do I believe that He desires for me to be silent, to be inferior, to be powerless.

In fact, the more I pray and study and discuss with other spiritual leaders, the more I am sure of it. When I read in the Bible that I am chosen and dearly loved (Colossians 3:12), and that I can approach God’s throne with boldness (Ephesians 3:12) I feel the gentle whisper of the Holy Spirit, telling me: “Be bold. Be strong. Be exactly whom I have created you to be.”

Sometimes it’s easy to listen to the voices that say women should not be leaders among men or that a husband and wife cannot function as true equals in a marriage.  After all, those voices are often the loudest.  But just because a voice is blaring as if through a megaphone, that doesn’t make it right.  Wasn’t it Elijah who searched for God in the wind and the earthquake and the fire? And after all the other “voices” had died down, it was instead the whisper of God that spoke to Elijah.

When the voices that ring like thunder surround me, trying to lessen my credibility, I seek the one who speaks in a whisper.  And as one of our congregation’s favorite songs states “I’ve heard the tender whisper of love in the dead of night. And You tell me that you’re pleased.” God is pleased. With me.  Just as I am: with a passion for leading others into His presence.

I am blessed to have a husband who believes in empowering women, and to be part of a church that celebrates women in all levels of leadership. Not every woman can say that. But a woman, just like a man, is an image-bearer of the one true God. When the voices of women are silenced, the entire church misses out on part of God’s creation. On the other hand, when women are valued and encouraged to embrace their God given gifts, the church is blessed. Inspire her to use her voice, make room for her in your circles, give her a seat at the table. You may just find that this is pleasing to God.

Kristin Gilmore studied Religion at MidAmerica Nazarene and is a locally licensed minister at Corbin Church of the Nazarene. She is a worship leader, bible study teacher, and budding preacher. She is a mom to three who enjoys running and coffee, just not at the same time. You can find Kristin on Facebook here and Twitter here. 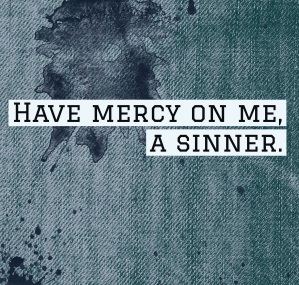 What we think of ourselves says a lot about how we approach God and how we treat others. In the Gospel of Luke Jesus uses a story of two men at the Temple praying in order to teach us a thing or two along those lines.

One of the men is a Pharisee. He is devout and schooled in theology. He knows the Scriptures in and out. He has mastered the disciplines of his faith. He knows he is good.

His prayer is a picture of self-righteousness, “Thank God I’m not like everyone else.”

The other man is a tax collector. He is considered a traitor to his people and his faith. He gets rich working for the bad guys while lining his pockets with the neighborhood’s money. He is despised. He knows he is broken.

He prays from a place of humility and contriteness, “O God, have mercy on me, a sinner.”

Jesus explains it is this man, not the “good” one, who leaves the Temple right with God.

Now sometimes us church folk fall into the category of Pharisee. We start thinking we are better or more holy than others because we do the right things or avoid the wrong ones or at least don’t do them as much as other people. The problem with the Pharisee’s prayer is not that it isn’t true, but that it is built on what he has done and dripping with pride.

This mindset is graceless. Here being right with God is about behavior modification. Here we forget we need God just as much today as we did at our lowest point. And here we become hypocritical judges in our assessment of everyone else. We reassure ourselves of just how good we are and miss out on God’s work in our lives and transformational relationships with people around us.

This is a dangerous place to live.

There is another mindset that isn’t mentioned in the parable but is prevalent in our culture. Sometimes we model a similar prayer, “Thank God I am just like everyone else.”

Here we aren’t bothered by our brokenness, we are just glad we aren’t the only ones experiencing it. We excuse our behavior/thoughts/attitudes because everyone else seems to be on the same page and, hey, we’re just human after all. Here the idea isn’t to elevate ourselves over tax collectors, but to lower the bar for what is required of us.

We like being broken, so we don’t change. We rest in the comfort of knowing there are other broken people, so we don’t want to see them change.  We enjoy our sin. Or perhaps its too hard to resist so we’ll just stay right where we are.

This too is a dangerous place to be. Here we find cheap grace. Cheap grace is as useless as no grace.

The only proper approach is that of that tax collector. It is here we realize how much work needs to be done in us. That scandalous sinner or pious preacher, I need God. It is here we see regardless of how good or bad our behavior is we must have mercy.

Change without mercy is fine, but cannot save anyone. Mercy without change is easy, but meaningless. Mercy, when experienced with a humble heart, has the power to bring about change in us.

This is the mindset the Church is to have: acknowledging our need of mercy and allowing mercy to transform us.

That means more than mouthing these words in prayer, but allowing this understanding to shape us through and through. We are to embody this concept in attitude and action. It should guide the way we take inventory of our hearts. It should affect the way we approach our neighbors and our God.

O God, have mercy on me, a sinner.

May these words be on our lips and in our heart. May we pray them and live them. May we be humble and contrite. And may we find the mercy we so desperately need.