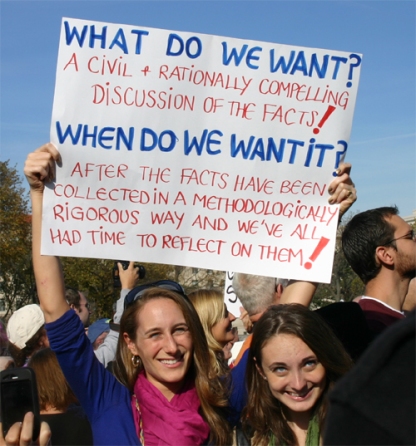 Can we talk about guns for a moment?

And by that I mean, can we talk about guns without being unreasonable? Without calling each other names? Without making stuff up? Without distorting the opposing arguments?

If you scroll through your social media feed you may doubt this is possible, but I assure you it is. During the March for Our Lives a woman who lost her son in the Parkland shooting and describes herself as a liberal shared about having a 45 minute, healthy conversation with Senator Marco Rubio. If they can do it, we can do it.

So come, let us reason together. Turn down the volume and shut off the memes for just a moment and let’s chat. Not only will we find we can do this, but that we have more in common than we think.

Let’s start with the fact that no sane person wants children to die in school. We are looking for ways to help prevent these tragedies from happening. Prevent being the operative word. Nothing we do will guarantee our children’s safety, but we can work to make our schools and the world a safer place.

Now how do we get there? Arm the teachers? Ban guns? Body scanners at the door? Clear backpacks? Police presence? Like you, I favor some of these and others I don’t. But let’s figure out where we agree.

I personally do not know where the line is. I have opinions. You have opinions. But we have agreed there is a line. So perhaps we can work our way in from there. Bazookas okay? How about hunting rifles? Can folks own a slingshot? A grenade launcher?

Even if we can’t agree on everything we can move closer together.

Another step toward reasonableness is putting aside unreasonable arguments. A popular meme I see frequently says, “Cain killed Abel with a rock. It’s a heart problem not a gun problem.” While I’m happy that folks want to look to Scripture for their direction, this is a bad argument. There is not one of us who would rather a person intent on murdering students be armed with a gun over a rock. We would take the rock every single time and the loss of life would be severely mitigated.

Yes, murdering people is a heart issue. And a mental health issue. And it has reaches to pretty much every area of a person. But we address heart issues with legislation intended to help prevent the heart issue from spilling onto innocent lives. Alcohol limits for driving and public intoxication do exactly this.

Those making claims from the opposite position have faulty arguments as well. One of the common ones is to inflate statistics to support the cause. For example, the number of gun incidents at schools so far this year (which has been shared far and wide) almost always includes a suicide in the parking lot of a school that had been closed seven months prior and a few other incidents that are a stretch. Suicide is tragic and should be grieved and addressed, but it was not a “school shooting,” as popularly understood, and claiming it as such is unfair.

We can’t share something simply because we agree with the intent behind it. We need to put in the time (usually about 45 seconds on Google.com) and effort to figure out a fuller picture. The world is full of trolls who don’t think twice about making up lies to create chaos or gather more people to their side. If you have to lie or skew information your position is weak to begin with. And those of us who click like and share without first thinking it through, are just as guilty.

So, we agree there is a line. And we should agree that a lot of us use some bad arguments to try and convince others. What else can we agree on?

How about this: laws are not the solution and yet are still tools that help us. Can we land there, together? We’ve already mentioned we are working to prevent and limit tragedy, not guarantee its eradication. Can a law help? We mentioned our current laws that do just that in other areas. Why couldn’t they apply to guns as well?

Is it possible that there is some type of law we could all agree on that will help us? Absolutely possible. Here is an example: When a school bus stops and lets a child off the red lights flash on top. In order to protect children the law says you cannot pass the bus. Reasonable. Efficient. Useful. Doesn’t mean someone won’t break the law and endanger children, but here regulation is helpful.

Certainly not every law is fair or useful. Laws can be too restrictive or selectively enforced. Laws can be deemed unconstitutional. But they can be good with the right amount of thought and purpose. If we are being reasonable, we can agree on this.

To help us agree that laws are not the solution but can be helpful, let’s also agree that enforcement of the laws already on the books is necessary. If we don’t follow through on what we already say is a risk, more laws won’t do us any good. A law is only useful when it is used the right way.

Now if you are tracking with me so far we have agreed that children shouldn’t be murdered in school, that there is a line somewhere for weapon ownership, that we shouldn’t make ridiculous arguments, and that laws are not the solution but can be helpful.

We can work from here. From here we can begin to look up and out at the proposed solutions and the challenges we face in this nation. This is a complex problem therefore the solution is likely complex too.

We’ve not touched on theological reasons for or against owning weapons (if you want to have that conversation, I’ll buy the coffee). We’ve not yet addressed whether more guns in public is safer than less guns. We’ve not talked about the role of parenting or discipline or extremism or video games or the news media or any of that.

If we are going to have these conversations (and we must) the best way forward is to find where we agree on something. Common ground is where we can make the most difference. Where we can sit eye to eye and talk. Where we can listen and hear from each other as humans, not angry anonymous people from the internet.

We are in this together. So let’s be reasonable. Let’s talk. Let’s listen. Let’s learn. Let’s think. Let’s be honest. Let’s do better. Our kids are depending on us. We can do it. Let’s agree on that.